Find in all pebbles! 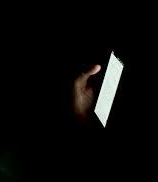 The truck was stinking and moving very slow. Daily, he wishes not to continue this job from tomorrow; in vain! He was so ardent to get a smartphone, and wants to use it smartly!
Though he could not answer what is really smartness with a smartphone, at least, he thought, with WhatsApp, earphone music make him smart.

The day has come, faster than expected; thanks to his hard work and determination.

He became smart with the smartphone; the world became a rectangle!

After a few months, he stopped using his smartphone…

Broken rectangle became so wide and vast.., with a lot of experiences!

One thought on “Smartphone.”