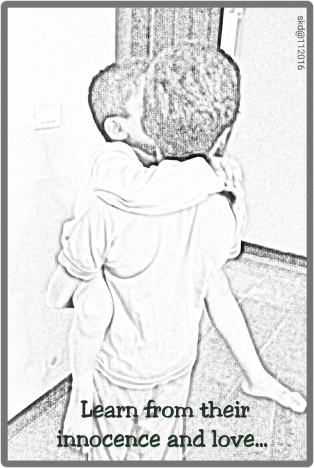 The little one was shouting to play pokemon cards. . . .
Now Newton’s third law first! 😃
“Every action, there is equal and opposite reaction. . . !”
The elder was so adamant and said : “I don’t want to play pokemon cards”
Now, Newton’s first law comes into play!
“…an object either remains at rest or continues to move at a constant velocity, unless acted upon by  a netforce! “ 😃
“I want to play pokemon cards”
“I don’t want to play pokemon cards”
“I want”
“I don’t want”
Getting repeated the sequence!
Now some netforce is to be applied to break the state!!!
Netforce was applied by Mama on the elder first….!
“Santhanu….just leave it, even if you don’t want to play!….please keep quiet for a moment”
Little one: “I want”
Elder: Silence with helpless look at mom (like “why command to me only!!!”)
Now the state is changed!
Papa came with some peace mission!!
He said to the little one with lot of ‘love’! : “oh my geo boy….you are so lovely like your elder brother! Your elder brother always plays with you and helps you….and you like him the most…right?”
(Papa calls the little one ‘geo boy’ when the love increases too much 😉 )

Before papa completes his mesmerizing and compassionate words…..the little one continued with the same amplitude!  😉

“I like pokemon the most, not etta” (“etta” means elder brother)

Elder one felt so sad.
First netforce by Mama, now shock-force by his little brother!!
He walked to his room and embraced his ‘ben10‘ pillow! 😃
Now the little one became helpless…the target person is missing…!
Papa continued his words of truth about love and brother-hood!
“Geo boy…..see, can pokemon take you to the park? can it play with you cricket? can it help you taking bath? can it tell stories for you…..but your lovely bro does all these for you right? I know you love your brother the most….Only because you just want to play pokemon, you said, you love it the most…..But your brother felt so sad….”
Little one became really sad….and started weeping and said….” Papa, I told simply only…..”
Papa: “I know! Just go to your brother and say ‘I love you the most etta…..pokemon is a toy only. I love you the most!’
(Papa is too much and trying so hard to create a drama! 😉  )
Little one gave a serious look to papa. Papa did not know what is going to happen next….
Little one: “What should say….you said…repeat!”
Oops…Papa got a great relief!
Papa:” I love you so much etta…pokemon is a toy only. I love you the most”
Little one:”m….” (not so ready to act like the ‘director’!!)
He went to elder brother.
Now it is elder’s turn! 😃
Elder:”You don’t talk to me! You said, you like pokemon more than me!”
OMG….drama is in anticlimax!!!
The little one broke! Cried loudly with lot of emotions and came back running……
“Papa….Papa……etta did not……not…let me….” (he could not complete!)
Mama could not control……”Santhanooooooooooo……”
Papa intervened again with peace flag and truths of love!!! 😉
“Geo boy….your brother felt so sad when you said you like pokemon the best…hence he reacted like that….i will tell you a trick….”
Papa started showing by acting to Geo boy!
“…see…you just go near him….say 3 feet near…” (showed the little one how to measure 3 feet showing 3 tiles on the floor)
He continued….
“and tell him i love you and then give a kiss on your brother’s hand….that’s all…everything will be alright…”
[This papa will make a scene!!! 😉 ]
By the time…the elder became a little cool…..he slowly was coming out of his room……
The little one:” Papa….you say….you say!!!”
Now papa is in trouble…..He started getting ready to act the scene…..
Papa started his acting…”Etta….I love….” (He turned to the boys telling this emotionally….). But he did not need to complete the scene….!
He saw the elder is holding the little one and the little one was giving kisses to his etta…..
Scene Cut! Smiles unlimited!
Sincere Love…Learn from them!
Child is the father of man (and woman!)
Tailpiece:

Do you know what is pokemon? It is Pocket Monster –> PokeMon!
Courtesy: Pokemon Fans Association ;))
Photo of pokemon: Google Labelled for reuse with modification.